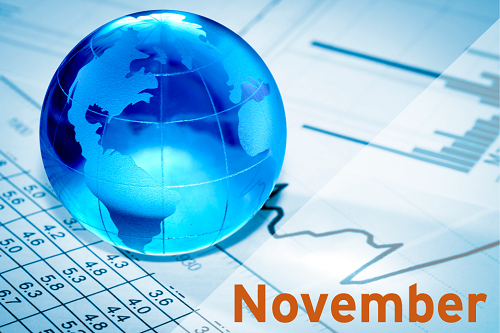 Following a tranquil end to the third quarter, market volatility returned with a vengeance in October. Equity markets ignored continued positive economic data in the U.S. and instead focused on fears of rising interest rates, elevated valuations, slowing global growth, and ongoing trade tensions between the U.S. and China. The S&P 500 fell nearly 7.0% over the month and recorded ten days with a move of plus or minus 1.0%, two times more than all of calendar year 2017. Despite the surge in volatility during the month, U.S. Treasuries traded with a rare positive correlation to equities and continued to sell off sending rates higher across the yield curve.

While domestic equity markets stumbled at the start of the fourth quarter, the U.S. economy remained on solid footing and continues to be a relative bright spot against a backdrop of slowing global growth. U.S. Gross Domestic Product (GDP) expanded at a faster-than-expected 3.5% in the third quarter while labor markets continued to tighten. The U.S. added a better-than-expected 250K jobs in October and nonfarm payrolls have averaged 209K per month year-to-date compared to 180K per month through the same period last year. The unemployment rate fell to a 48-year low of 3.7% and average hourly earnings rose at the fastest pace in nearly a decade at 3.1% year-over-year.

Solid domestic fundamentals and measures of core inflation sustaining near or above the central bank’s 2.0% target should allow the Fed to raise rates by an additional 25 basis points at the December FOMC meeting. Pricing in the Fed Funds Futures marketplaces the odds of a December rate hike at 75% while market-based expectations for 2019 remain below the Fed’s dot plot projections.

Looking ahead to 2019, the Fed will enhance policy transparency and flexibility by holding a press conference following each of its policy meetings rather than once a quarter in conjunction with its updated forecasts.