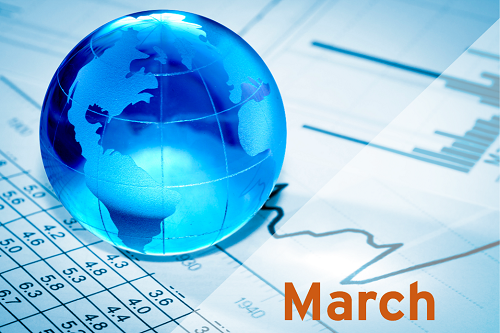 While growth has slowed, the U.S. economy is not in the lion’s den. The U.S. economy cooled with only 2.6% GDP growth in Q4 2018, compared to 3.4% growth in Q3 2018, as the Federal Reserve takes a “patient” approach to interest rates. GDP remains above the average pace of expansion and still supports growth throughout 2019, just at lower levels than the year prior.

Trade tensions between the U.S. and China continue to roar but could be resolved before the end of the month and avoid calamb-ity. Despite the President’s goal of reining in the U.S. trade deficit, the deficit continues to grow in light of tariffs as U.S. imports remain above exports according to the March 6 Commerce Department’s report. Among the changes the administration is hoping China will make are an increased number of purchases of U.S. goods as well as greater access to China’s markets for U.S. companies.

The February employment report released on March 8 stated that only 20,000 new jobs were created in February compared to 311,000 created in January. But low job growth supports continued upward pressure on wages, upholding the expectation for continued solid consumer spending. The unemployment rate declined to 3.8%, lowered in part by previously furloughed federal workers now back on the job. The lower unemployment rate gives the Federal Open Market Committee (FOMC) another reason to be patient about further rate hikes.

On the monetary policy front, the FOMC will vote on the Fed Funds rate target range on March 20, 2019, and the expectation is that the range will remain unchanged at 2.25%-2.50% partly due to little inflationary pressure. The inability of the UK Parliament to agree on a Brexit deal and the volatility in the markets continue to be clouds hanging over the global economy. Weaker growth expectations in the U.S., the Eurozone, and China are likely to lead to a slower pace of monetary policy tightening; however, the timing of the next recession in the world’s largest economies remains much longer than two shakes of a lamb’s tail.