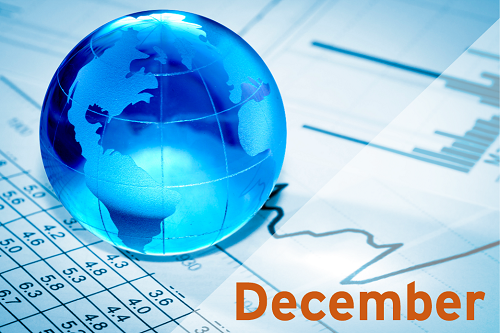 As the weather changes and we find ourselves in the midst of the holiday season, the markets remain squarely focused on the trade negotiations between the U.S. and China. A whipsaw of headlines has actually provided precious few details regarding a “phase one” trade package, with market participants adding a partial trade resolution to their holiday wish list.

The Federal Reserve delivered their gifts early this year in the form of three 25 basis point cuts to the Fed Funds benchmark rate. These moves, along with recent stronger economic data points, have pushed any imminent recession risks further down the road. Commentary by FOMC members since the last meeting also points to an end of the recent rate-cutting cycle. With monetary policy on hold for the foreseeable future, the trade narrative is heavily influencing the outlook for growth, inflation, and the future direction of interest rates.

Global central banks continue to provide accommodative policies supporting their respective economies, many of which have a far bleaker outlook than the U.S. Brexit fears continue to impact the UK, where the economy is growing at the slowest pace since 2009. Germany’s industrial sector is suffering its steepest downturn in a decade. The Chinese economy continues to lose momentum with the trade war and weak business sentiment impacting growth this year. With the global economy struggling to find a way out of the slow lane, monetary policy has served as the last line of defense to avoid a major synchronized downturn. A growing number of economists are calling for governments to kick in fiscal stimuli to aid in the cause.

Despite these issues, U.S. consumer confidence remains strong with a solid job market and retail sales pointing to a robust end of the year. November payrolls topped all estimates with a gain of 266k jobs and the three-month average increasing to the highest level this year. The end to the General Motors strike helped boost manufacturing payrolls, and unemployment dropped down to the lowest level we have seen in this half-century. Hopefully this renewed optimism leads to a little extra in the U.S. economy’s stocking this holiday season.